Machine learning is very good at optimizing predictions to match an observed signal --- for instance, given a dataset of input images and labels of the images (e.g. dog, cat, etc.), machine learning is very good at correctly predicting the label of a new image. However, performance can quickly break down as soon as we care about criteria other than predicting observables. There are several cases where we might care about such criteria:

In all of the above scenarios, the primary object of interest -- the scientific theory, the effects of a policy, and the value function, respectively -- is not part of the observed data. Instead, we can think of it as an unobserved (or "latent") variable in the model we are using to make predictions. While we might hope that a model that makes good predictions will also place correct values on unobserved variables as well, this need not be the case in general, especially if the model is mis-specified.

I am interested in latent variable inference because I think it is a potentially important sub-problem for building AI systems that behave safely and are aligned with human values. The connection is most direct for value learning, where the value function is the latent variable of interest and the fidelity with which it is learned directly impacts the well-behavedness of the system. However, one can imagine other uses as well, such as making sure that the concepts that an AI learns sufficiently match the concepts that the human designer had in mind. It will also turn out that latent variable inference is related to counterfactual reasoning, which has a large number of tie-ins with building safe AI systems that I will elaborate on in forthcoming posts.

The goal of this post is to explain why problems show up if one cares about predicting latent variables rather than observed variables, and to point to a research direction (counterfactual reasoning) that I find promising for addressing these issues. More specifically, in the remainder of this post, I will: (1) give some formal settings where we want to infer unobserved variables and explain why we can run into problems; (2) propose a possible approach to resolving these problems, based on counterfactual reasoning.

Suppose that we have a regression model $p_{\theta}(y \mid x)$, which outputs a probability distribution over $y$ given a value for $x$. Also suppose we are explicitly interested in identifying the "true" value of $\theta$ rather than simply making good predictions about $y$ given $x$. For instance, we might be interested in whether smoking causes cancer, and so we care not just about predicting whether a given person will get cancer ($y$) given information about that person ($x$), but specifically whether the coefficients in $\theta$ that correspond to a history of smoking are large and positive.

In a typical setting, we are given data points $(x_1,y_1), \ldots, (x_n,y_n)$ on which to fit a model. Most methods of training machine learning systems optimize predictive performance, i.e. they will output a parameter $\hat{\theta}$ that (approximately) maximizes $\sum_{i=1}^n \log p_{\theta}(y_i \mid x_i)$. For instance, for a linear regression problem we have $\log p_{\theta}(y_i \mid x_i) = -(y_i - \langle \theta, x_i \rangle)^2$. Various more sophisticated methods might employ some form of regularization to reduce overfitting, but they are still fundamentally trying to maximize some measure of predictive accuracy, at least in the limit of infinite data.

Call a model well-specified if there is some parameter $\theta^*$ for which $p_{\theta^*}(y \mid x)$ matches the true distribution over $y$, and call a model mis-specified if no such $\theta^*$ exists. One can show that for well-specified models, maximizing predictive accuracy works well (modulo a number of technical conditions). In particular, maximizing $\sum_{i=1}^n \log p_{\theta}(y_i \mid x_i)$ will (asymptotically, as $n \to \infty$) lead to recovering the parameter $\theta^*$.

However, if a model is mis-specified, then it is not even clear what it means to correctly infer $\theta$. We could declare the $\theta$ maximizing predictive accuracy to be the "correct" value of $\theta$, but this has issues:

The two problems above also suggest a solution: we will say that we have done a good job of inferring a value for $\theta$ if $\theta$ can be used to make good predictions in a wide variety of situations, and not just the situation we happened to train the model on. (For the latter case of predicting causal relationships, the "wide variety of situations" should include the situation in which the relevant causal intervention is applied.) 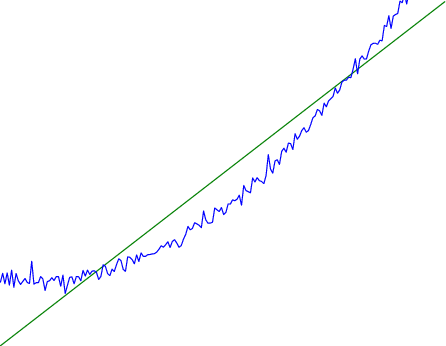 Here the blue line is the data we have ($x,y$), and the green line is the model we fit (with slope and intercept parametrized by $\theta$). We have more than enough data to fit a line to it. However, because the true relationship is quadratic, the best linear fit depends heavily on the distribution of the training data. If we had fit to a different part of the quadratic, we would have gotten a potentially very different result. Indeed, in this situation, there is no linear relationship that can do a good job of extrapolating to new situations, unless the domain of those new situations is restricted to the part of the quadratic that we've already seen.

We will next consider a slightly subtler setting, which in economics is referred to as a structural equation model. In this setting we again have an output $y$ whose distribution depends on an input $x$, but now this relationship is mediated by an unobserved variable $z$. A common example is a discrete choice model, where consumers make a choice among multiple goods ($y$) based on a consumer-specific utility function ($z$) that is influenced by demographic and other information about the consumer ($x$). Natural language processing provides another source of examples: in semantic parsing, we have an input utterance ($x$) and output denotation ($y$), mediated by a latent logical form $z$; in machine translation, we have input and output sentences ($x$ and $y$) mediated by a latent alignment ($z$).

We can understand what goes wrong by consider the following procedure, which formalizes the proposal above:

As before, if the model is well-specified, one can show that such a procedure asymptotically outputs the correct probability distribution over $z$. However, if the model is mis-specified, things can quickly go wrong. For example, suppose that $y$ represents what choice of drink a consumer buys, and $z$ represents consumer utility (which might be a function of the price, attributes, and quantity of the drink). Now suppose that individuals have preferences which are influenced by unmodeled covariates: for instance, a preference for cold drinks on warm days, while the input $x$ does not have information about the outside temperature when the drink was bought. This could cause any of several effects:

In practice we will likely have some mixture of all of these, and this will lead to systematic biases in our conclusions about the consumers' utility functions.

The same problems as before arise: while we by design place probability mass on values of $z$ that correctly predict the observation $y$, under model mis-specification this could be due to spurious correlations or other perversities of the model. Furthermore, even though predictive performance is high on the observed data (and data similar to the observed data), there is no reason for this to continue to be the case in settings very different from the observed data, which is particularly problematic if one is considering the effects of an intervention. For instance, while inferring preferences between hot and cold drinks might seem like a silly example, the design of timber auctions constitutes a much more important example with a roughly similar flavour, where it is important to correctly understand the utility functions of bidders in order to predict their behaviour under alternative auction designs (the model is also more complex, allowing even more opportunities for mis-specification to cause problems).

In general, under model mis-specification we have the following problems:

While typically machine learning models are optimized to predict well on a specific distribution, systems capable of counterfactual reasoning must make good predictions on many distributions (essentially any distribution that can be captured by a reasonable counterfactual). This stronger guarantee allows us to resolve many of the issues discussed above, while still thinking in terms of predictive performance, which historically seems to have been a successful paradigm for machine learning. In particular:

(Note that it is less clear how to actually train models to optimize counterfactual performance, since we typically won't observe the counterfactuals! But it does at least define an end goal with good properties.)

I think that building machine learning systems that can do a good job of counterfactual reasoning is likely to be an important challenge, especially in cases where reliability and safety are important, and necessitates changes in how we evaluate machine learning models. In my mind, while the Turing test has many flaws, one thing it gets very right is the ability to evaluate the accuracy of counterfactual predictions (since dialogue provides the opportunity to set up counterfactual worlds via shared hypotheticals). In contrast, most existing tasks focus on repeatedly making the same type of prediction with respect to a fixed test distribution. This latter type of benchmarking is of course easier and more clear-cut, but fails to probe important aspects of our models. I think it would be very exciting to design good benchmarks that require systems to do counterfactual reasoning, and I would even be happy to incentivize such work monetarily.

Thanks to Michael Webb, Sindy Li, and Holden Karnofsky for providing feedback on drafts of this post. If any readers have additional feedback, please feel free to send it my way.