For this post, I commissioned Misha Yagudin, a top-ranked forecaster, to provide feedback and commentary. I include selected comments as quotes throughout.

For open-ended questions, it's easy to underestimate the number of plausible outcomes. For instance, while practicing for the forecasting class, the course staff were asked to predict the following question:

Which NBA player will have the highest average points per game (PPG) between October 20th and October 27th?

To answer this question, I thought about star players who were top scorers, and also looked at who had high PPG in the previous season. The names I came up with were Giannis Antetokounmpo, Steph Curry, Luka Doncic, Kevin Durant, and LeBron James, so I made the following forecast:

In fact, the top scorer was Ja Morant, and the second highest scorer also wasn't on my list. In retrospect, 23% on "other" was a pretty bad prediction, and I should have put more like 60-70% on "other".

This is a general challenge with forecasting when the set of options is large. Even if each individual choice in the "other" category isn't that likely, there are a lot of choices in that category, and they add up to a large number. For instance, there are 30 teams in the NBA, so even counting just the best player on each team, my top-5 list was missing 83% of the options. Even if the other 25 starters were each only half as likely as LeBron to top the PPG, they would account for 66% of the probability mass.

Our tendency to underestimate "other" is worsened by the narrative fallacy, which is our cognitive tendency to frame events in some logical coherent order, and the disjunction fallacy, where the whole is often estimated to have lower probability than the parts. It's easy to imagine Curry scoring lots of points, but harder to imagine Ja Morant (although he is quite good), and even harder to imagine "some random player" scoring a lot.

Misha: You bring up misc cognitive biases. My default explanation would be availability bias. Per wikipedia: "Availability bias, is a mental shortcut that relies on immediate examples that come to a given person's mind when evaluating a specific topic, concept, method or decision."

On the other hand, there are times when "other" really does have a low probability. For instance, in a given week there's really only 1 or 2 movies that have a real chance of topping the box office returns.

Since deciding the right probability for "other" is surprisingly difficult, it's worth practicing as a distinct skill. In this post, I'll discuss two ways of handling it: the MECE principle, and reasoning about variance. I'll also end with some quotes from Misha on good cognitive strategies for handling "other" options.

The MECE principle, which stands for "mutually exclusive and collectively exhaustive", is a special case of decomposing the problem. It's pretty much what it says: write down a set of options that exhausts the set of possible outcomes, and come up with a probability for each one.

At face value, this would mean not having an "other" option at all, but this is usually impractical---we're not going to assign a probability for all 450 players in the NBA. But even so, MECE can be useful. For instance, realizing that there were 30 teams (and hence 30 "best players") highlighted that the top 5 options didn't cover much of the space.

If I were to apply MECE to the NBA prediction, I'd break it down as something like:

To turn this into a probability, we'll add up all the possibilities, using the fact that probabilities sum to 1 and working backwards. Concretely: let $p$ be the average probability that a super-scorer has the highest average PPG. Then among the 30 players in the first 2 categories, we have a total probability mass of

And including the next tier of second-best players should increase the total mass by another 25% (since they're 1/4 as likely), to get to $16.66p$.

In actuality, the other 30+120+270 players have some probability mass. Maybe the second-best players are 10% as likely, the third-best players are 4% as likely, and so on. This collectively doesn't add much--maybe it increases the calculation above to around $19p$ instead of $16.66p$. This would mean that "other" had 74% probability instead of 70%, so not a huge difference.

(This all glosses over the fact that the different players' points-per-game are not independent of each other, and thinking about this would probably change the answer a bit, but hopefully this illustrates the idea.)

MECE for box office scores. As another example, let's apply MECE to predicting which movie tops the box office this weekend (the weekend of Nov. 13th, 2021). If I go to reddit.com/r/boxoffice, I see that there are around 10 choices: Eternals, Clifford, Dune, Belfast, No Time to Die, Venom, Ron's Gone Wrong, The French Dispatch, Spencer, and Antlers.

Most people in the predictions thread are predicting Eternals at around \$25M, Clifford around \$12M, Dune at \$5M, No Time To Die at \$4M, and the rest below that. It's hard for me to imagine these being off by a factor of more than 5 (if I were being careful I'd check that historically that basically never happens), so it would be safe to assign probabilities to Eternals, Clifford, and Dune, and place everything else at something pretty small in total (maybe even as small as 1%, or a bit higher to account for the probability that I misread the list).

MECE is nice because it correctly demonstrates that the NBA prediction should place lots of probability on "other", and the box office prediction not so much.

Misha: On MECE --- I think it's an excellent approach whenever it works. For it to work, you need to be able to enumerate space of possibilities or approximate it somehow. I think your examples are good and helpful.

The other way to apply MECE to this example would be to come up with a simple heuristic to predict the probability, and then write a script to compute it for all the players. Even if the heuristic ignores a lot of specific relevant details, it will probably be okay on average and so give a good estimate of the relative magnitude of "other" vs. the top 5 or 10 options.

For the NBA example, I could grab the list of each player's scores from the previous season, look at all the weeks, and see how often each player comes up on top. This will miss differences across seasons (such as injuries or player improvement) and miss specifics of the upcoming week and probably several other factors, but this probably affects the "other" and "top scorer" categories roughly similarly and will give a reasonable estimate of the ratio. 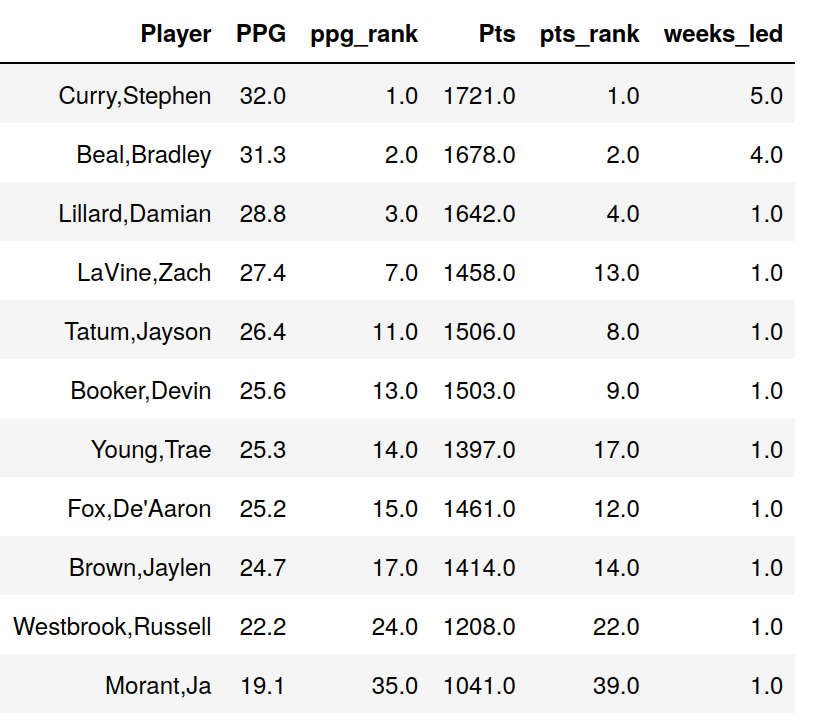 I listed each player that led scoring for at least one week, and also included their season total points/game (PPG) and points (Pts), as well as how they ranked among all players.

This implies that historically, if you had listed the top 6 players, you would have missed 8/18 = 44% of weeks. But this top 6 list has the benefit of hindsight at the end of the season, whereas in our case we were predicting a new season and should have more uncertainty. So this is consistent with the 60%-70% estimate for "other".

Another approach would be to think about how noisy a player's point total is for a given week, and how that compares to the difference in points across players. For the latter, here were the top 3 scorers for the first 3 weeks of January 2021:

The winner was decided by 12, 2, and 1 points, respectively.
On the other hand, here is the variation in weekly points for the top 6 scorers in the NBA: 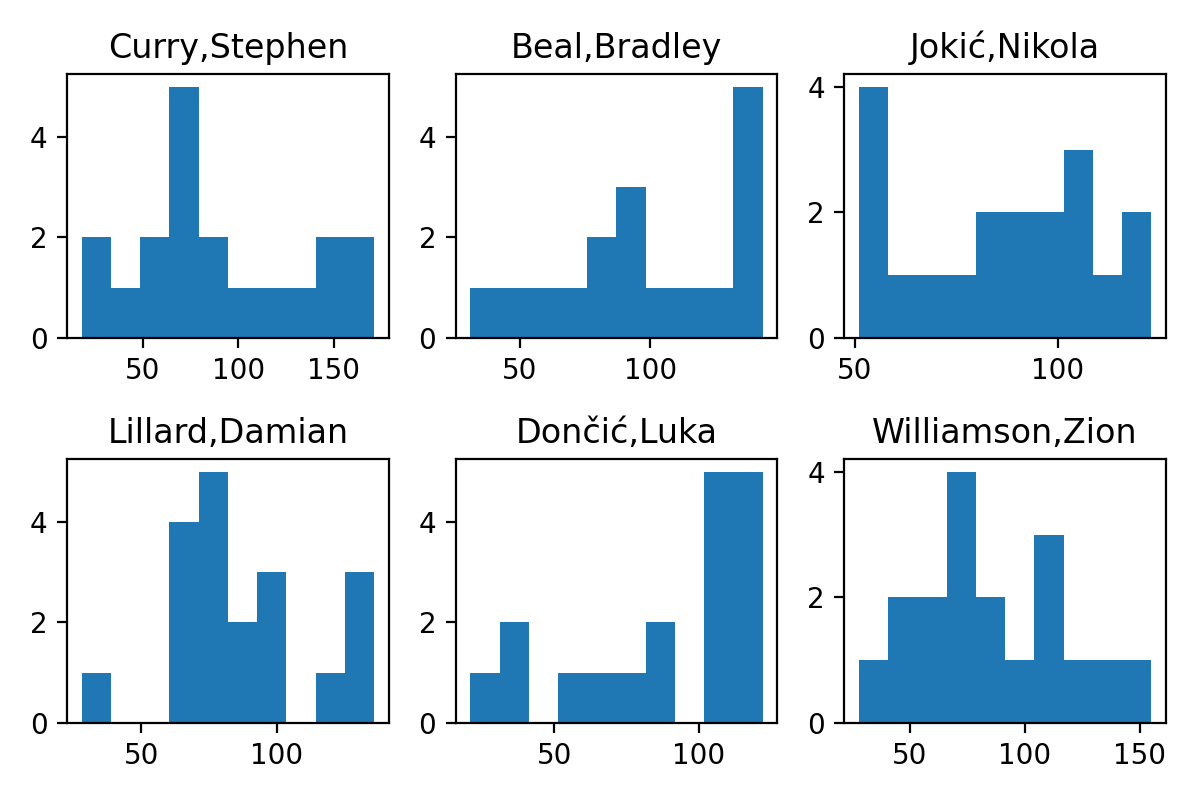 The standard deviation is huge, around 30 points. This immediately tells us that there are a lot of people who "could" win in a given week. Since there are 3-4 games in a week, anyone whose average points/game is within 7.5-10 points of the leader is within 1 standard deviation. This comes out to ~17-25 players. If we compare to our earlier result, 16/18 of the weekly leaders were in the top 17 PPG, and 17/18 were in the top 25, so this is the right ballpark for the set of "plausible" options.

Misha: I am not knowledgeable about the NBA. One thing which strikes me immediately: the time interval is short, the variance will be huge; this is on top of basketball being a fairly high variance game in general.

And to connect these intuitions to common probability distributions:

Cognitive Tricks for Remembering "Other"

While math can build useful intuition, what's probably more important is good mental heuristics for remembering "other" options. Here is Misha's commentary on this:

It's quite often helpful to ask: "huh, could I forget about another option which will sound plausible" — I usually do it for open-ended questions, and it helps me moderate my guesses.

A good example is any trivia, an open-ended question. After thinking more about my calibration, I started annoying people by saying that I think the answer is X with a probability of like 20%. They expect certainty and, unfortunately, don't update on both of us betting on wrong answers.

Other options occur everywhere. Finally, Misha points out that it's often useful to think about other options even for questions that appear to have a small choice set (e.g. yes/no questions):

I would say that the "other" option appears more often than people think, and your post implies.

One of the most satisfying forecasts I've ever made was about whether Saudi Arabia would cancel Hajj because of coronavirus. The question's framing promoted black and white thinking, and just asking whether there could be other solutions led us to come up with a few which were plausible (and which, imo, would better satisfy stakeholders).

So asking "could I not think about something which will sound plausible" is very helpful!