This is the third in a series of posts studying how Facebook's newsfeed affects political polarization. To recap:

(Recall that we call a news article pro-attitudinal if it agrees with a user's political views, and counter-attitudinal if it runs counter to them; and that this is usually determined by looking at what outlet the article appears in.)

In this post, I'll finally look at the causal effect of the newsfeed on user's beliefs and attitudes. In summary:

To me this paints an optimistic but limited outlook for interventions on Facebook newsfeeds. Fully balancing the feed seems unattainable without strongly ignoring user preferences, and I'd personally guess that 3 points is about the best you can get. That's only 30% of the polarization we'd like to address, but that could already be a big deal! Especially since a cheap intervention can already get you to 10%.

In addition, the fact that newsfeeds don't seem to influence voting behavior removes some ethical concerns. While many have worried about Facebook influencing elections, in the U.S. at least I suspect this worry is overstated, and the numbers above seem to back that up. If the primary effect of changing newsfeeds is simply to make people less angry with each other, without affecting their voting preferences, that seems like a pretty clear good to me.

Caveats and limitations. These conclusions only cover the direct effects of Facebook on users. If Facebook shapes the incentives of traditional media, it could have a larger total effect than estimated above. These incentive effects are harder to measure, although I'm part of a collaboration trying to take a first pass at this.

The conclusions also are specific to Facebook rather than social media in general. For instance, other lines of evidence suggest that Twitter could drive polarization by socializing users to be angrier (Brady et al., 2021) and by amplifying antisocial users (Bor and Petersen, 2021). I am not as well-versed in this literature, but Noah Smith wrote a recent thought-provoking overview of these two results.

Sources. This post continues to follow Levy (2020); in addition to the descriptive statistics in the last post, Levy performed a clever intervention to estimate causal effects, which I'll describe in more detail below. It also draws partly on Allcott et al. (2020) who study the effects of temporarily quitting Facebook altogether. [Disclosure: Levy, as well as two of the authors of Allcott et al., are collaborators.]

We want to understand the effect on users of changing the newsfeed. If we were Facebook, we could do this by randomly changing a subset of user feeds, and then sending follow-up surveys to measure political attitudes. However, we aren't Facebook, so we need to do something more clever. I'll describe Levy's approach to handling this below. 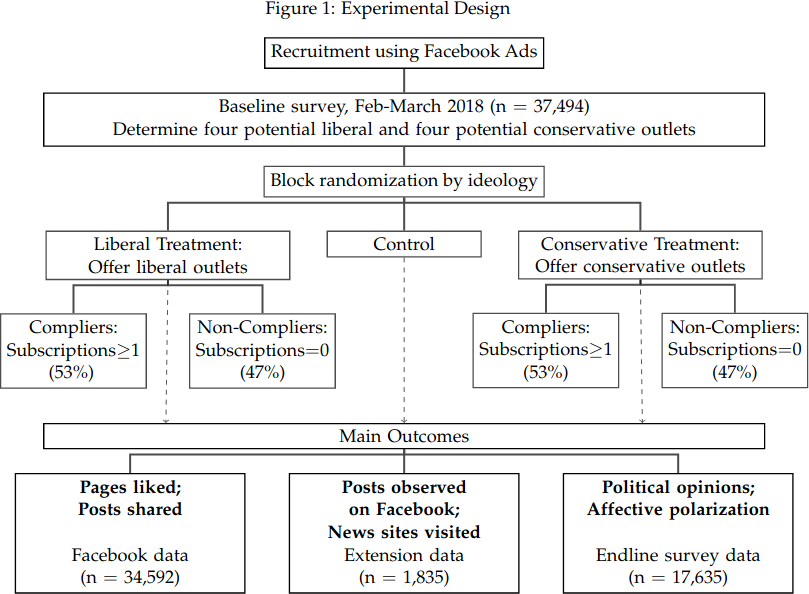 How does more diverse news shape opinions and attitudes?

The basic answer is: sort of. It turns out that it doesn't change their beliefs much at all: users aren't going to change how they vote based on Facebook articles. However, it has a small but meaningful effect on attitudes: how users feel about the opposing party. This is important, because this sort of affective polarization is probably the most dangerous to a functioning democracy (see Iyengar et al., 2019), so we want ways to reduce it.

In a bit more detail, Levy finds that for the counter-attitudinal arm, affective polarization decreased by about 1 point on a 0-100 scale; in comparison, it has increased by about 10 points over the past 20 years, so this undoes 10% or "2 years worth" of polarization. That's a small slice of the pie, but pretty impressive for a single intervention!

In even more detail:

Levy applies a few back-of-the-envelope calculations to get additional estimates:

This last point is important, as it implies that the 3.94-degree decrease from equalizing the feed is probably not actually attainable, since it would require showing users content that was significantly more balanced than they would seek out themselves.

Pulling together the above numbers and estimates, it seems to me that:

Levy also estimates several other causal effects, primarily on how much his nudge is able to change the composition and slant of newsfeeds. While not directly related to the polarization question, I still found them interesting, so I've collected them in this section.

Effect of intervention on media consumption

As stated above, Levy nudges users to subscribe to 4 outlets that are either pro-attitudinal (in line with political leaning) or counter-attitudinal. The following figure summarizes the results of this intervention. 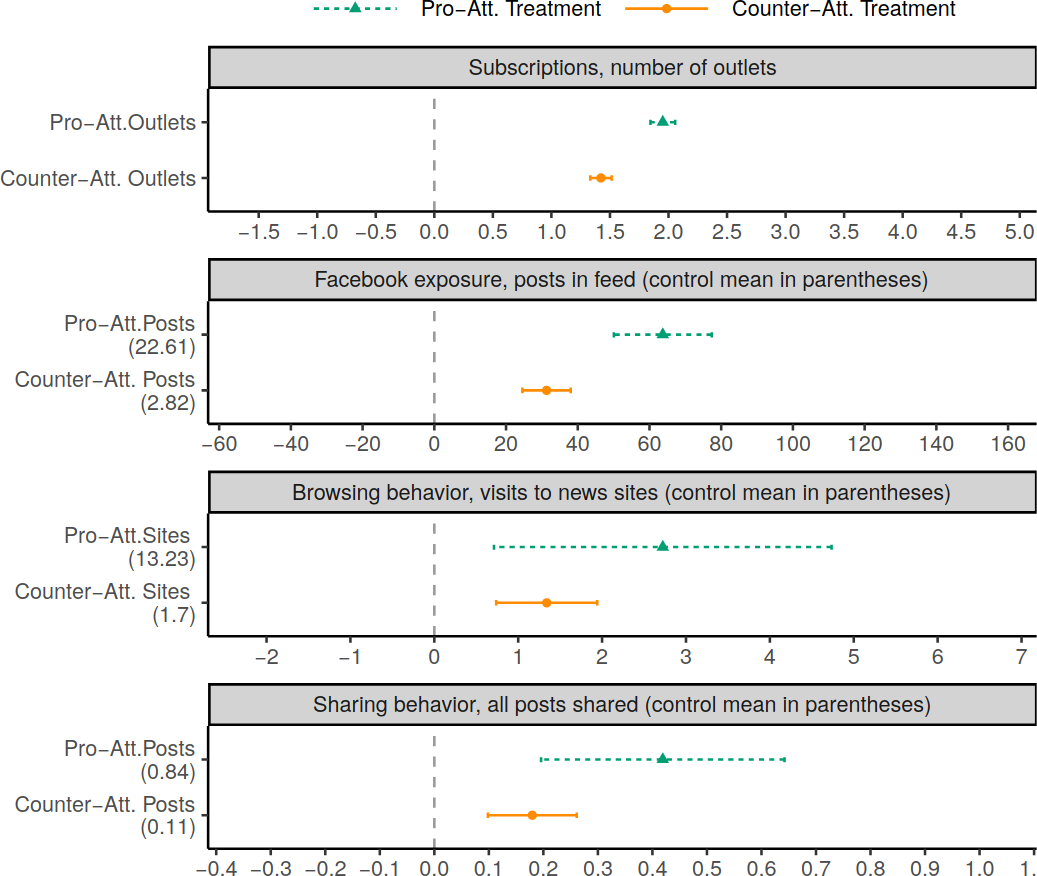 Below are some more details on the intervention effects, pulling quotes from the paper.

On the feed. "In the two weeks following the intervention, participants in the pro- and counter-attitudinal treatments were exposed to 64 and 31 additional posts from the potential pro- and counter-attitudinal outlets, respectively. For comparison, control group participants were exposed to 266 posts from leading news outlets, and 2,335 posts in total." Note the implication that only 11% of Facebook posts are news; among those news posts, the intervention adds around 10%-25%.

Effects of intervention on news slant

Using the above numbers and some back-of-the-envelope calculations, we can calculate how much this intervention changed the overall slant of newsfeeds. Keep in mind that only 11% of the Facebook feed is news, so it is possible to change the slant significantly without changing the overall feed by that much. As before, I'll mostly quote the result of Levy's calculations, although I did check that they seemed reasonable to me: 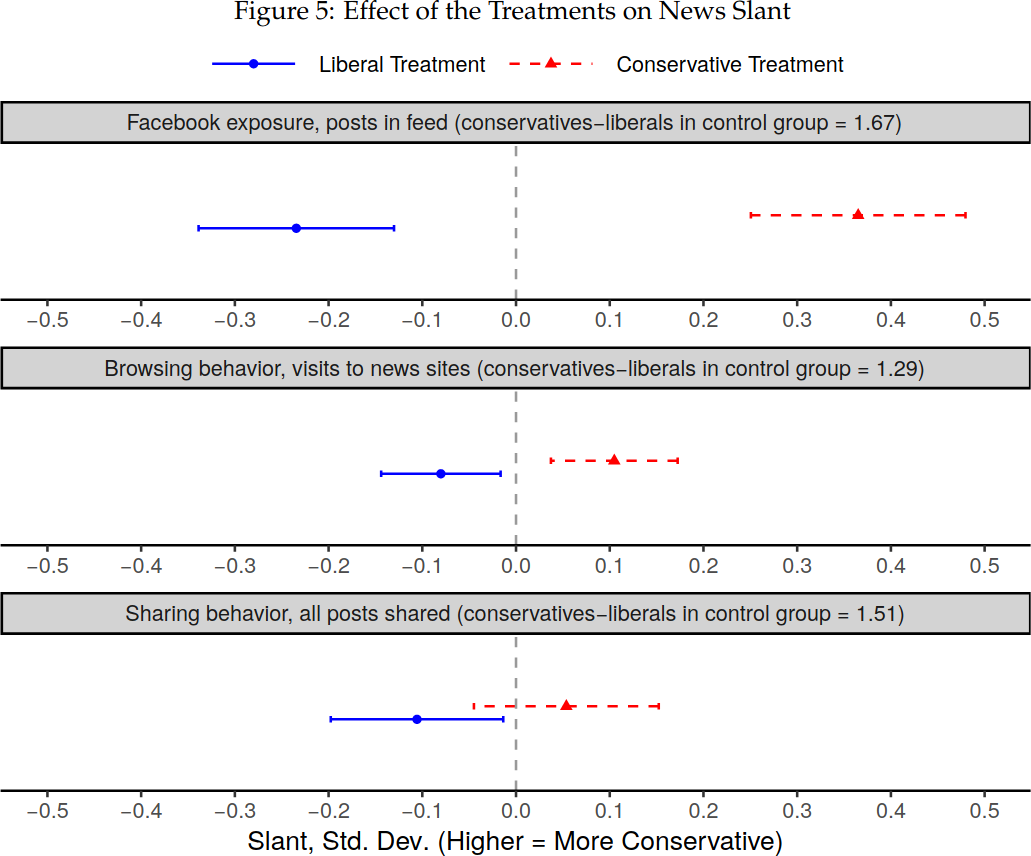