The micro-level data comes primarily from two sources: feed data collected by Levy (2020) using a browser extension, and a larger but less curated dataset released by Comscore. I'll describe and analyze this in more detail below. [Disclosure: Ro'ee Levy is a collaborator.]

Overall, I conclude that the Facebook news feed is on average more aligned with a users’ political orientation (compared to web search or direct browsing), but this statement alone masks important complexity. Facebook is more likely to show users content that strongly confirms or strongly opposes their views, mainly at the expense of neutral sources. In a bit more detail:

Let's start by understanding how news on Facebook feeds compares to other online browsing behavior. I'll separate this into three distinct channels: “Direct”, “Social”, and “Search”. Direct refers to going to a website like nytimes.com and reading the articles; search to search engines like Google; and Social to social media, which is primarily Facebook.

My data comes from Levy (2020), who recruited users via Facebook ads to install a browser plugin that would monitor their browsing, and also asked them questions about their political leaning. He also analyzes another dataset collected by Comscore, but that dataset doesn't measure the partisan lean of users. Instead, Levy (following previous researchers) imputes partisan lean on the Comscore data using zip code, which is a bit sketchy, so I'll mostly focus on the plugin data.

Levy includes some interesting descriptive data in Tables 4a and 4b of his paper. There he constructs various measures of political segregation, and by most of these Social is about 50% more segregated than Direct and Search (which are comparable). However, the most interesting part is a breakdown of articles into 5 categories, based on whether articles are (strongly/weakly) in (dis-)agreement with a users’ political leaning. These paint a nuanced picture, and I've reproduced them below:

Comscore Data (sketchy, for reasons discussed above; Table 4a)

Interestingly, Facebook also has a left-leaning skew relative to other sources of news, contrary to some conventional wisdom.

Where Do Slanted Articles Come From?

Levy’s data also separates the Facebook feed into content from friends and from Pages. It turns out that most of the ideological segregation comes from Pages:

Levy Feed Data by Source (from Table 4b; also includes an overall measure of Segregation)

This is a pretty interesting take-away, but I'm a bit uncertain what to conclude from it. If Pages didn't exist, would Facebook's algorithm put more effort into skewing posts from Friends? Or is it that Pages are more linked to advertising revenue and therefore more heavily filtered to agree with users? If anyone has good explanations I'd be interested to hear from you.

Levy's Figure 8 provides an alternate look at this, based on nudging users to Like either a pro- or counter-attitudinal news outlet (more on this in the next post): 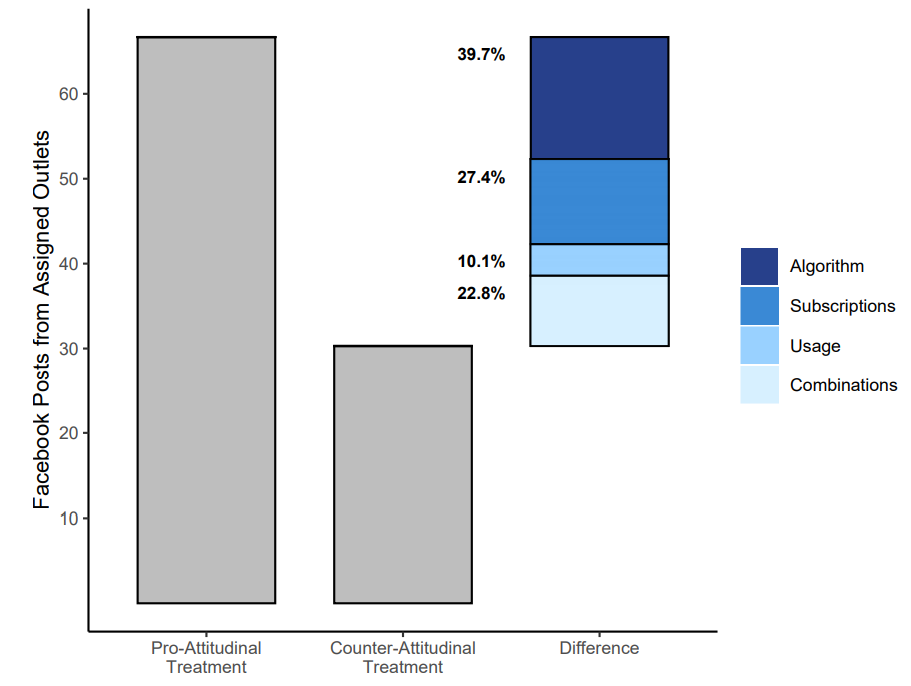 The way to interpret this figure is that, after the nudge, a user will see a little over twice as many stories from that outlet if it is pro-attitudinal vs. counter-attitudinal (note this is better than the baseline 3:1 ratio). Where does the difference come from?

Finally, let's estimate how much news actually comes from Facebook, since it's smaller than you might think. My guess is that about 10% of political news is referred through Facebook. Comscore finds 4% while Levy finds 14% (but this is an obvious overestimate since all people in the sample are Facebook users). But Levy also notes that “Parsely (2018) tracks pages viewed in thousands of sites and estimates that 16% of traffic related to Donald Trump in April-May 2018 is from social media”. These estimates vary widely but average out to around 10%.

Overall, my take is that the primary issue with Facebook is not the slant but rather the extremism of news on Facebook's feed. People are seeing extreme news that confirms their opinions, but they see extreme news that contradicts their opinions as well. It's not clear how helpful the latter is: I'd imagine it's easy to reject those articles, and it could cause people to dig in further to previously held beliefs. Moderate counter-attitudinal news, in contrast, could be an effective intervention to decrease polarization, and we'll see that this is indeed the case in the next part of the series.